Here’s What the Interest Rate Hike Means for the Canadian Housing Market, According to Experts

About Real Estate, Across Canada, Buying a Home, Did You Know?, What's New in the Housing Market? 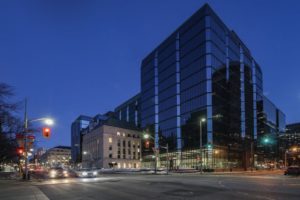 Yesterday, the Bank of Canada (BoC) hiked the overnight rate 25 basis points to 1.50 per cent, the fourth increase in the last 12 months.

In its release, the Bank noted that the housing market seemed to be stabilizing, and would be able to weather the hike. Some economists agreed with the sentiment, while others argued that there is still cause for concern.

“Of course, beyond the fundamentals, the current economic environment is hardly normal,” writes TD senior economist Brian DePratto, in a note discussing the hike. “Underlying risks related to housing markets and household debt already argue for caution in the pace of hikes.”

Meanwhile, Scotiabank VP and head of Capital Markets Economics Derek Holt wrote that the housing market does seem to be where the BoC wants it — at least for now.

“On housing, the BoC says ‘Recent data suggest housing markets are beginning to stabilize following a weak start to 2018,’” he writes, in a recent note. “When asked in the press conference if this is viewed as positive — presumably in the context of the BoC’s prior stability concerns — the Governor said ‘yes.’ That is not new per se…but it reinforces the point.”

But how will the rate hike affect homeowners, or would-be buyers? According to Zoocasa managing editor Penelope Graham, there are a number of ways the news could affect Canadians’ decisions, and wallets, in the coming months.

“Anytime a rate hike happens, it has a material effect on affordability,” Graham tells Livabl. “Mortgage rates are going to get more expensive, and that’s going to have an impact on homeowners.”

It could also affect when buyers decide to enter the market. According to Graham, some may choose to buy sooner rather than later, wary of another rate hike on the horizon.

“People may ask themselves, ‘Should I get into the market now, because it’s only going to become more expensive in the future,’” she says. “It’s a buyer mentality where they’re aware that more rate hikes are likely coming.”

If there’s one thing economists can agree on, it’s that more hikes are certainly on the way, with most predicting another hike in October. Yet DePratto is quick to mention that a fluctuating housing market and trade tensions with the US means nothing is for certain.

“Despite today’s hike only bringing the policy rate to about half of its ‘neutral’ level, the path forward, particularly in terms of the pace, remains cloudy and the Governor continues to emphasize that monetary policy needs to be done in real time,” he writes.

About Real Estate, Across Canada, Buying a Home, Did You Know?, What's New in the Housing Market?