About Real Estate, Across Canada, Around Ontario, Around the House, Around Toronto, Baby Boomers, Buying a Home, Condos For Sale, Did You Know?, Gen X, Homes for Sale, Millennials, Rental Units, Selling a Home, Uncategorized, What's New in the Housing Market? 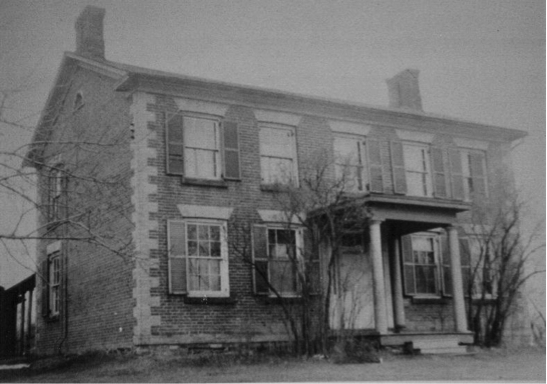 Photo of Coulter house taken in 1929.

Andrew Coulter purchased 100-acre Lot 14, Concession II in Etobicoke in 1822. This was the second lot south of today’s Eglinton Avenue, between Martin Grove Rd. and Highway 427.  The exact construction date is unknown, but by 1852 Coulter had built an elegant 11-room, 5-bay Georgian-style house that faced west on small rise of land and backed onto the Mimico Creek Valley. It was made of red brick kilned on the property, with quoins of yellow brick, and it stood on a foundation of large boulders set in local blue clay.

Andrew Coulter was born in County Down, Ireland in 1793 and died in Etobicoke on July 18, 1857.  His wife, Martha Smith, was born in Ireland in 1799 and died in Etobicoke on August 12, 1877.  Together Andrew and Martha had eight sons and one daughter, and they and numerous descendants lie in Richview Methodist Church Cemetery, in the middle of the Hwy. 427 and Hwy. 401 interchange.  Houses of two of their descendants remain standing at 98 and 112 Ravenscrest Drive.

After Andrew’s death, the property passed to his son, William.  In 1888, it was purchased by Rebecca Pearson.  In 1903, her descendants divided the property into two 50-acre sections, selling the east half to Charles Laver and the west half to James R. Dixon.  The west half again changed hands several times until it was purchased by Leonard Lambert in 1930 for $8,500. 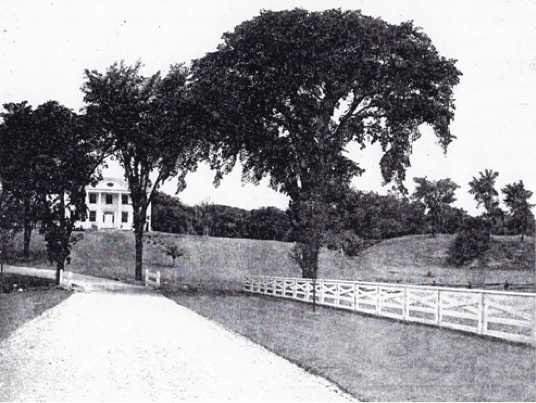 In 1939, Lambert sold the house and its surrounding 50 acres to construction magnate, Percy F. Law, for $16,000.  A Toronto Star article that year said: “P.F. Law of Toronto has purchased through the C.R. Purcell Co., farm realtors, the country residence on the bank of Mimico Creek shown.  With the house were sold farm buildings and 50 acres of rolling wooded land, fronting on Highway 27.  The house is 100 years old and contains 11 rooms.  A covered walk connects an old brick bakery with the residence.”

Law covered the brick with white clapboard siding and added a large two-storey neo-classical portico on the front, with four Corinthian columns supporting a large pediment.  The front door is flanked by recessed sidelights and topped with a “cobweb” fanlight. 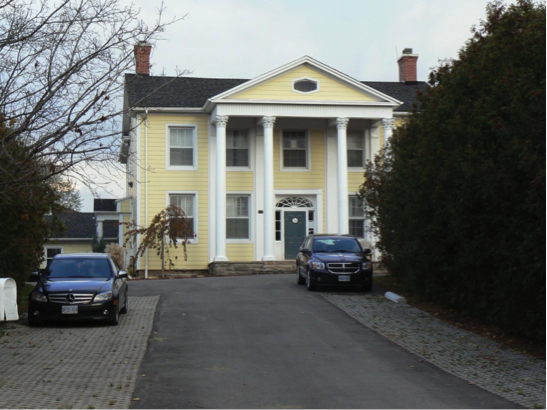 In 1956, Law sold the property on either side of the house to George Wimpey and Co. Ltd.  In 1961, Edmund Peachey developed the area as West Deane Park, Deane being his wife’s middle name and the one she used.  The house and approximately 11 surrounding acres were retained by the Law family until 1982 when they were sold to developer, Gordon Mason.  Mason preserved the house, having it rezoned for office use, and developed the rest of the 11 acres. Today, the Coulter/Law home is occupied by the Neurological Institute of Ontario.
​
Researched and Written by Denise Harris

About Real Estate, Across Canada, Around Ontario, Around the House, Around Toronto, Baby Boomers, Buying a Home, Condos For Sale, Did You Know?, Gen X, Homes for Sale, Millennials, Rental Units, Selling a Home, Uncategorized, What's New in the Housing Market?