Some of my Favourite Historical Architectural Gems in Toronto

Around Ontario, Around Toronto, Buying a Home, Condos For Sale, Decorating Trends, Did You Know?, miscellaneous, On a Personal Note 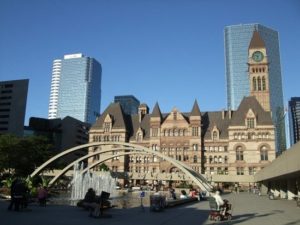 I am somewhat of a history buff and as a Real Estate Professional, I love architecture. So, I thought I would put together a blog about historical buildings in Toronto.

The first building I want to tell you about is Old City Hall.

Old City Hall was designed by architect, Edward James Lennox and it took him 10 years to complete. It was officially opened in September 1899 and was the largest city hall in North America. 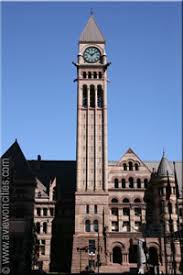 The iconic clock tower made this building the highest structure in Canada at that time. It towered 300 feet above Queen Street. The lobby is dominated by a huge stained-glass window designed by Robert McCausland who also designed the stained glass dome at the Hockey Hall of Fame (formerly the Bank of Montreal). 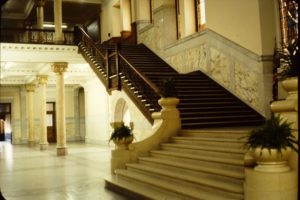 Alas, by the 1950’s, Old City Hall was outdated with its stone carvings, massive arches, long, wide staircases and gargoyles. And so plans were put in place to replace Old City Hall with a more modern building.

At that same time, the plans for the immense Eaton Centre were being formulated. That meant that 20 acres of prime land would be demolished including the Old City Hall.

Luckily, a public outcry forced the developers to keep Old City Hall so then the Eaton Centre was constructed around the former civic building. It would then be designated as a municipal courthouse.

In 2016, plans were announced to build a new courthouse. The City of Toronto, at that time, recommended leasing parts of Old City Hall to make it a shopping mall.

Fortunately, in February 2018, City Council voted 35 to 3 to eventually turn the structure into a Toronto History Museum, but only after the construction of a new courthouse in 2021.

This new courthouse will be located at 10 Armoury Street, right next to new City Hall between Centre Avenue and Chestnut Street.

With Toronto being touted as a “world-class” city, it would be fitting for our city to have a City of Toronto Museum, and I believe that Old City Hall would be the perfect place to house it. It is a crying shame that thousands of items that celebrate this city’s history are being housed in vast warehouses hidden away from the public.

Stay tuned to this spot for more history of Toronto’s iconic buildings.

Around Ontario, Around Toronto, Buying a Home, Condos For Sale, Decorating Trends, Did You Know?, miscellaneous, On a Personal Note