About Real Estate, Around Ontario, Around the House, Around Toronto, Baby Boomers, Buying a Home, Condos For Sale, Did You Know?, Gen X, Homes for Sale, Millennials, miscellaneous, Rental Units, Selling a Home, What's New in the Housing Market?

London, Ontario, a mid-sized city roughly two hours southwest of Toronto, wants you to come live there — for more than four years.

Best known for having the same name as a much bigger city in England, London is perhaps most-familiar to people in Toronto as the home of Western University.

Many current Torontonians have lived in the so-called “Forest City” at some point to attend school, or have at the very least visited to attend parties at said school, but not a whole ton of students stick around London after graduating.

With a population of just 383,822, it’s considerably smaller than Toronto, with fewer career opportunities in some sectors than what you’d find in a big city… or so most people would assume.

Apparently, London is flush with jobs, particularly well-paying jobs in tech and manufacturing. It’s also undeniably pretty with miles upon miles of riverbanks, ravines and manicured parkland to explore… but is that enough to leave Toronto for? 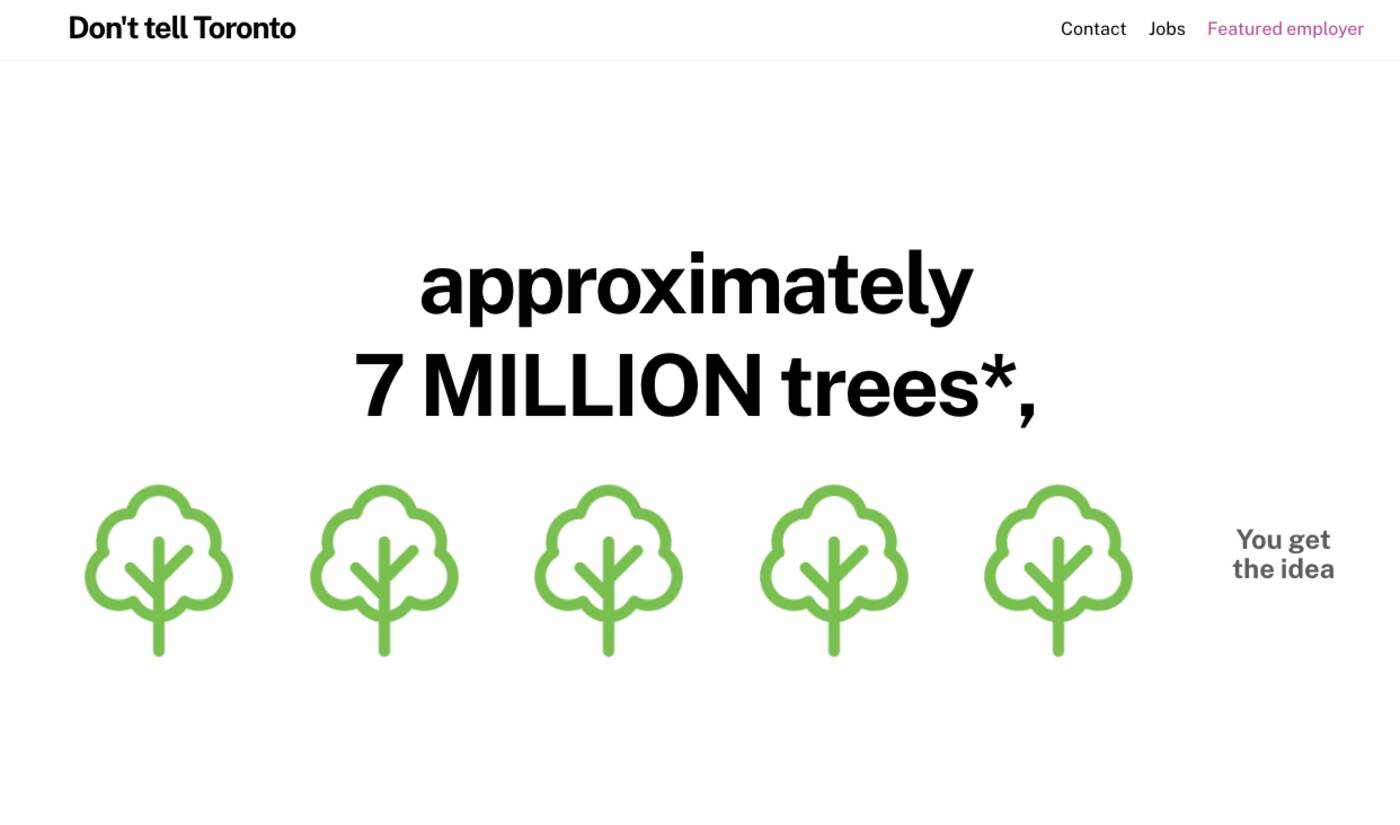 Seemingly unbeknownst to London, the City of Toronto actually has an estimated 11.5 million trees. Image via donttelltoronto.ca.

The London Economic Development Corporation (LEDC) is banking on it in the form of a new campaign called “Don’t Tell Toronto” that encourages current residents of Canada’s largest city to leave. For London.

“Hello, Torontonian,” reads a dedicated website for the campaign (donttelltoronto.ca.) “Look, we love Toronto, too. It has lots of great people, but let’s face it, it’s tough out there. Tough to find affordable living, tough to find a bit of green space, tough to find parking when you need it.”

“We know it stinks because there’s a pandemic and there is no.where.to.go,” the site continues. “That’s why we wanted to put a bug in your ear about London. We have a lot of opportunities at some of Canada’s best employers, AND wow, it’s just a great place to live.”

The campaign talks up factors like green space, festivals and homes with backyards, driveways, room for a family and a Great Dane.

“Have a look at the employers and reasons that make so many people love London. Your next career can be here — and don’t worry, we won’t tell Toronto if you don’t,” reads the blurb before spitting a bunch of facts about how many parks and trees London has (356 and 7 million, if you’re wondering.) 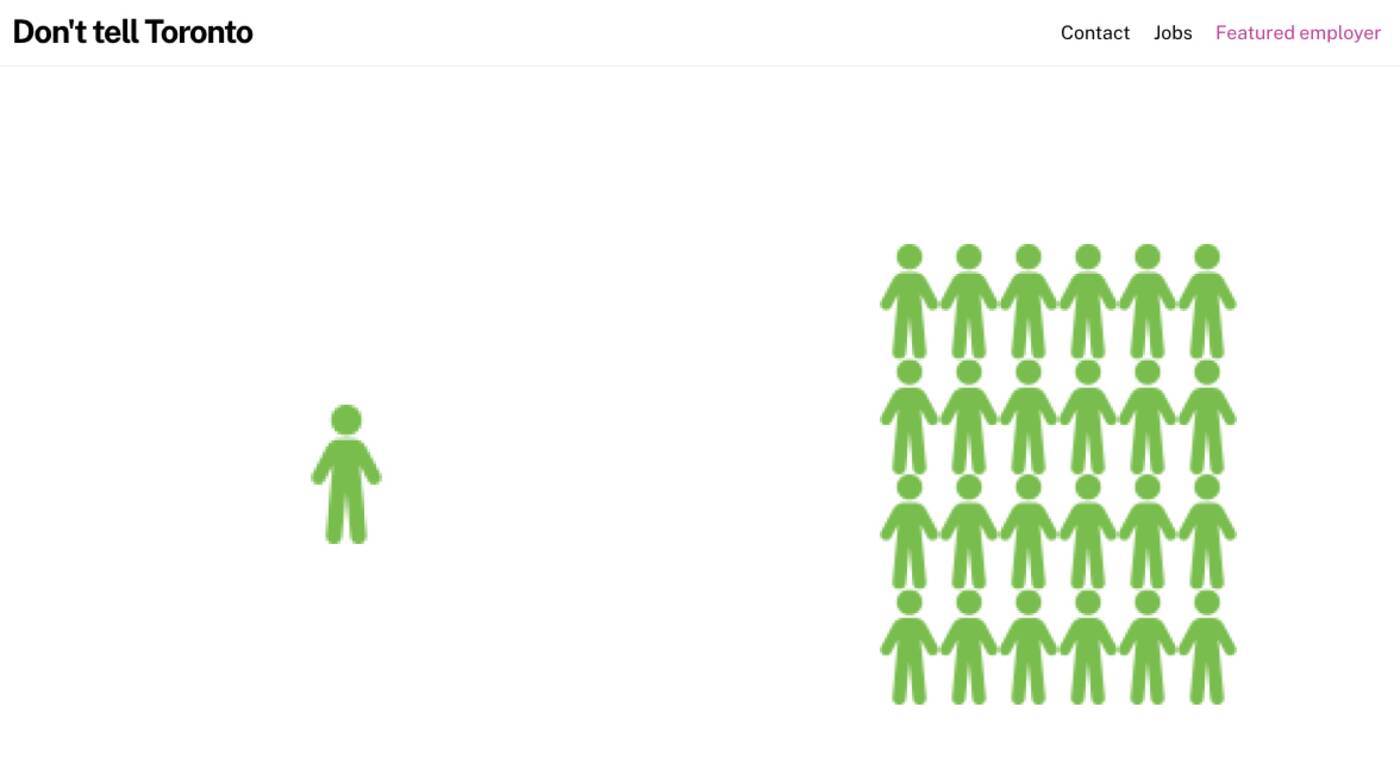 This is how many people live in London for every person living in Toronto. So. much. space. Image via donttelltoronto.ca.

With a current average home price of $608,049 (contrasted against the Greater Toronto Area’s $967,885), home affordability is one obvious reason for people in Toronto to consider smaller markets. Many have already left their tiny condos for actual houses in places like Guelph, Innisfil and Caledon.

Low population density is what London champions first and foremost, however, no doubt appealing to many city-dwellers who are tired of waiting in line for everything all the time.

“London has a population density of 178.1 persons per square kilometre compared to Toronto’s 4,149.5,” reads the website. “That’s space.”

But is it life? I mean, that depends on what you value. If it’s a high-paying job with a low cost of living, London might be perfect. If it’s access to all things fun, cool and interesting within walking distance of your sick hard loft… it’s not.

For a full picture of all the things Toronto has that London doesn’t, go visit for a few days and see how bored you get.

About Real Estate, Around Ontario, Around the House, Around Toronto, Baby Boomers, Buying a Home, Condos For Sale, Did You Know?, Gen X, Homes for Sale, Millennials, miscellaneous, Rental Units, Selling a Home, What's New in the Housing Market?