What Happens to the House After a Divorce?

About Real Estate, Around Ontario, Around the House, Around Toronto, Baby Boomers, Buying a Home, Condos For Sale, Did You Know?, Gen X, Homes for Sale, Investment Properties, Millennials, Selling a Home, The Law

The day you move in with a spouse is a happy one, punctuated with the joy of uniting your life with someone under one roof. Nobody crosses the threshold with the intent to dissolve the relationship. But, even with the best intentions, it happens. In Canada, 38 percent of marriages will end in divorce.

Ending a marriage or common-law relationship is an emotionally devastating and overwhelming time. Compound the emotions you’re feeling with the big question — who gets what? — and it can get messy. If you’ve joined assets like property, a separation can wreak havoc on your finances and well-being. To help homeowners handle the mortgage in a divorce, I spoke to Laura Paris, an associate at Shulman Law Firm in Toronto for advice on what to expect. 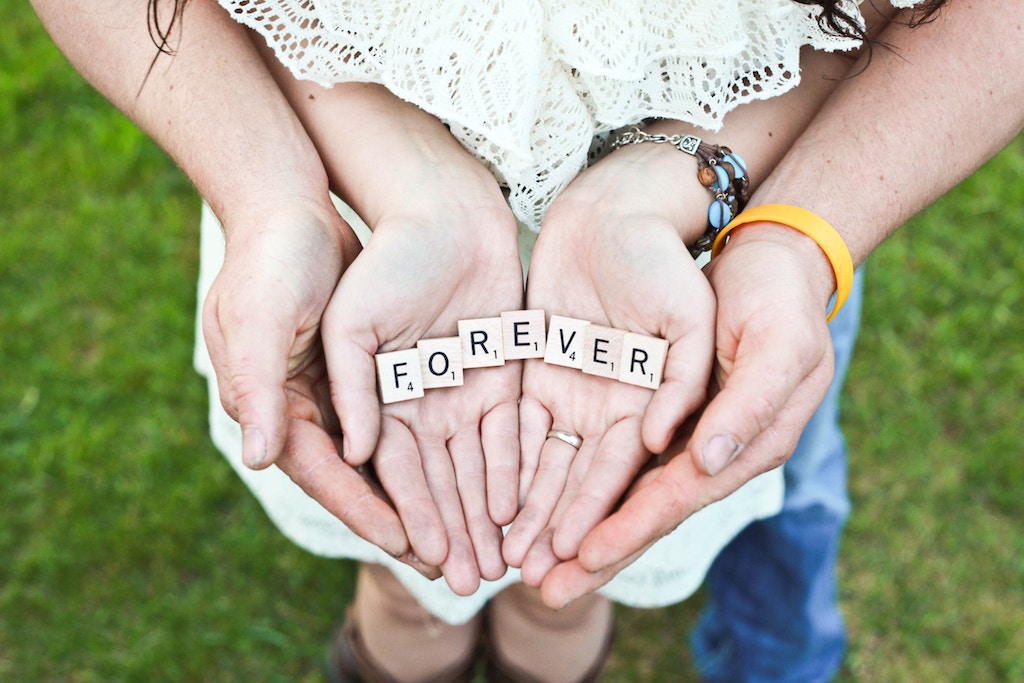 So, who gets what in a divorce?

Across Canada, each province and territory has slightly different laws for handling the division of property. But here’s the gist: under Canada’s constitution, a marriage is an equal partnership. It makes no difference if you’re responsible for running the household, earning the family income, or a blend of both — your contributions are considered equal. While it varies from province to province, this sentiment is echoed throughout the division of property.

“The law has developed significantly over the last 50 years or so. It’s begun to give weight to the non-financial contributions to a partnership,” says Paris. If mom or dad decide to stay home with the kids, they are sacrificing potential career/financial advancements and mitigating costs for the family (child care, for example).

“There are so many factors to consider,” says Paris. “You’re not just looking at what people are financially contributing but also what they might be losing. If someone has now sacrificed their career, they’re leaving the marriage without having accumulated as many sole assets because they were focused on the home, the kids, the domestic duties. They didn’t get a career of their own, they don’t have a retirement plan, so you look at it in that sense because those sacrifices do have a monetary value, at the end of the day. That’s what the court is doing — they’re putting value on those types of contributions.”

In Ontario, your spouse is entitled to half of the ‘matrimonial home,’ regardless of whether you purchased it before marriage. “A home gets the distinction of being a matrimonial home if it’s the property that you’re living in, at the date of separation,” says Paris. Both spouses also have equal rights to remain in the house, regardless of who has their name of the papers.

If you owned property in addition to the matrimonial home prior to the marriage, you receive the full value of the home, before the date of marriage. “Let’s say you had an investment property and at the date of marriage it was worth $300,000 (with no mortgage on it for simplicity purposes),” says Paris. “Now, you’re leaving the marriage and the property has increased to $700,000. The amount that ends up being divisible is only the increase in value — $400,000. You will get the benefit of $300,000, which is deducted from your total net family property. This is essentially a calculation of what your net worth is at the time of separation.” 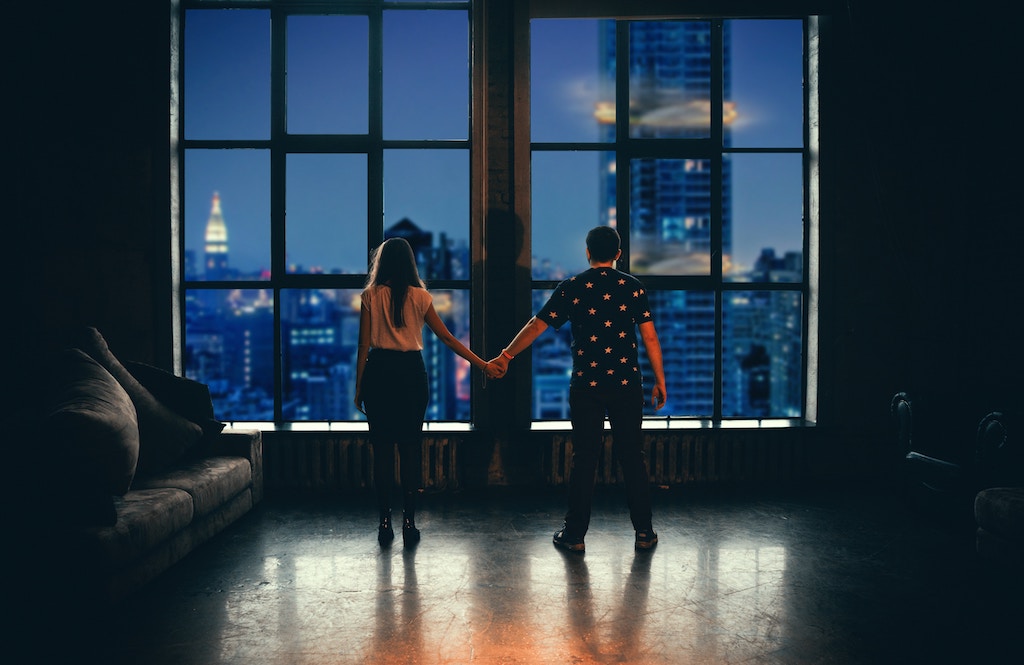 Photo: A. L. on Unsplash

What if you’re common law and decide to end your relationship?

With common-law couples, it’s a little different. In Canada, you’re considered common-law when you’ve lived with your partner for three years, or sooner if you have a child together. In this case, property is divided based on ownership — so if you brought property into the relationship, it remains your own. If you purchased the home together with joint title, the property will be divided equally.  If one spouse believes to have contributed more significantly to the asset, common law parties’ have the ability to advance trust claims, to accurately reflect the actual contributions by each party to the asset.  Paris warns that this process can easily become complicated and costly. “Trust claims happen to be more expensive because there’s a lot of evidence you need to put forward to prove it,” says Paris.

Couples can sign a marriage contract or cohabitation agreement (if you’re common law) that details who gets what and who would be responsible for outstanding debts if the relationship ends. These are legal documents that hold up in court, assuming they were executed properly. They must be completed with an attorney — promises on a cocktail napkin won’t do much for you. 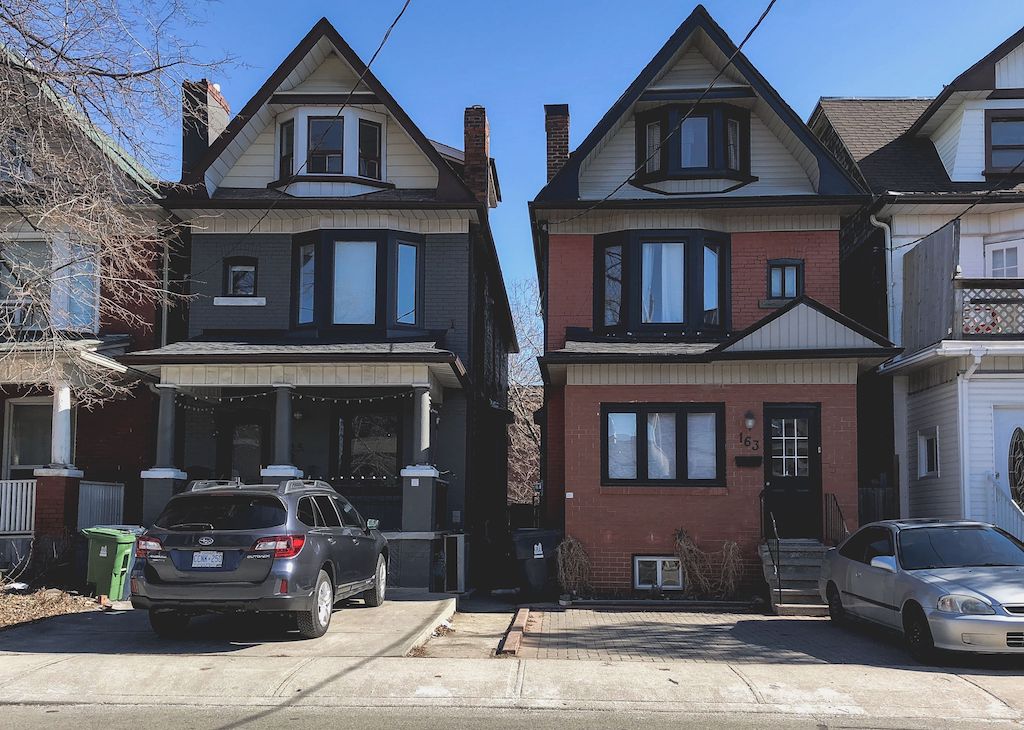 If you leave the home before the divorce is filed, will you lose it?

You have the same rights to the property whether or not you continue to live there at the time of the separation. It’s a common misconception that you have to stay in an unhappy living situation — potentially enduring abusive or high conflict situations — to get your share.

“You don’t need to continue living in the house to maintain your rights to the property,” says Paris. “Usually the divorce is the last step in any sort of matrimonial proceedings. All of the rights with respect to The Family Law Act start at the date of separation. There doesn’t have to be a formal divorce in order for you to start moving forward with splitting up the assets. We recommend it being a last step and the courts prefer that as well.”

However, if you leave the matrimonial home and stop contributing to carrying costs like property tax, mortgage payments and property insurance, there will be an adjustment to whatever amount you’re owed.

“If it’s a jointly owned property, typically you’re going to get the value of the home until the day that it’s sold or until the day that title is switched, subject to post-separation adjustments if you stop contributing to it,” says Paris. 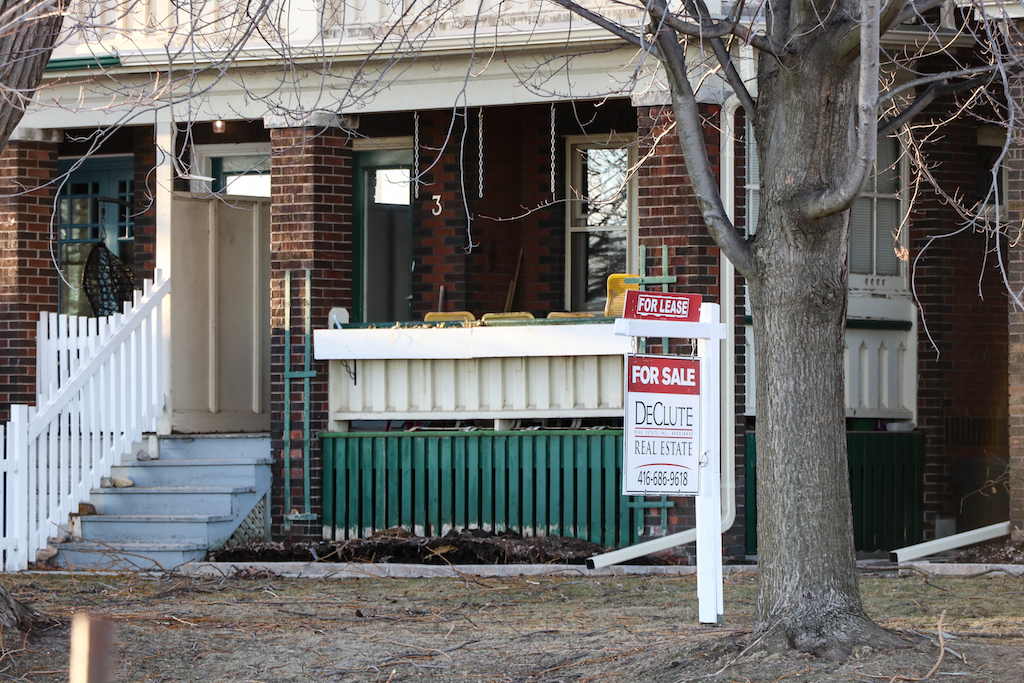 Selling the home you shared can be a loaded emotional experience and it can be difficult to untangle yourself from the place you once called home. But in Paris’ experience, it’s important to be realistic about what you can afford before making this choice. If the house is your primary asset, you’re probably going to have to sell. “Unless you have access to money via relatives or another source to buy out the property, you should probably accept that fact early on,” says Paris. “You have to accept, to a certain extent, that your assets are going to get hit because they’re being divided, and as a result, the lifestyle you once had may not be sustainable as a ‘single’ person.”

You’re legally not allowed to sell, rent or mortgage the family home without the other spouse agreeing to it (unless you get a court order). “It doesn’t necessarily have to be a joint property. When you have a spouse, there’s a line on any agreement of any purchase and sale that the spouse also has to consent to the sale of the property,” says Paris.

Some parents will fight for the house for their kids, who have acclimated to a specific neighbourhood, school and community. “It is possible that a court can order something called exclusive possession, which would give one party possession of the home until more or less the conclusion of the proceedings, and such orders are typically given if it is found to be in the best interest of the children,” says Paris.

Selling a home doesn’t have to be complicated. If you both agree to the sale, you won’t need to get a family lawyer involved. Although, a real estate lawyer has to be present at the closing of any real estate transaction, regardless of your marital status.

“If you have to get lawyers involved at that point in order to consent to the sale, it’s usually because one person is disputing it and the other person wants it sold,” says Paris. “In the event of a dispute over the terms of the sale of the home, they can be negotiated with family council, and the transaction would be completed by a real estate lawyer.” 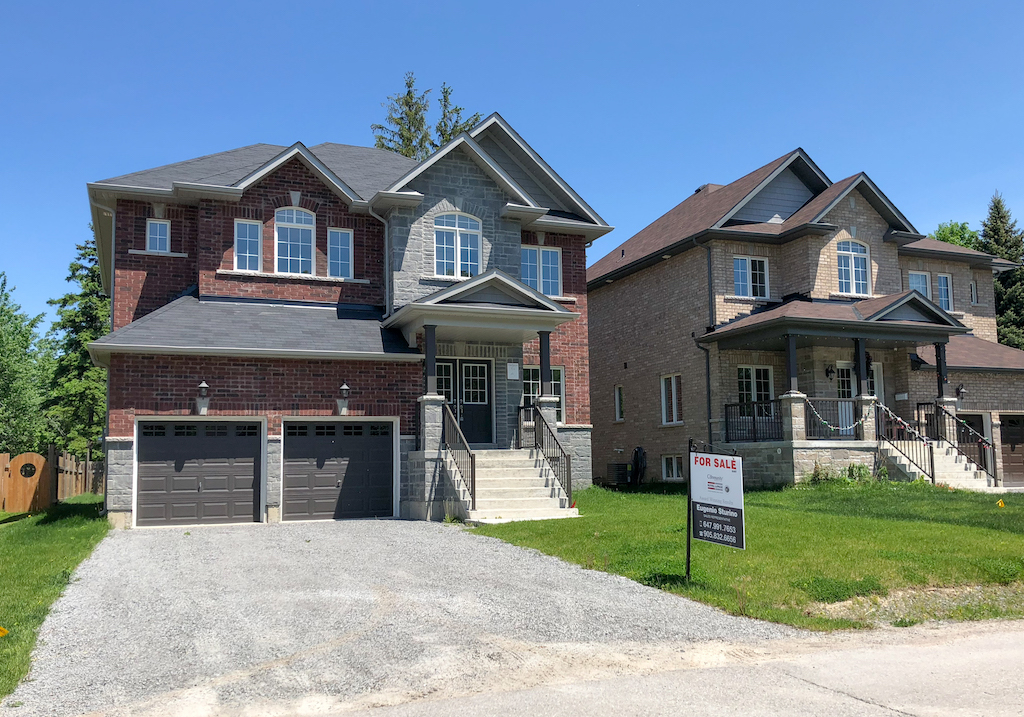 What happens to my mortgage if I want to sell or stay?

If you need to break your mortgage with your current lender, be prepared for significant fees that can easily climb north of thousands of dollars. Ask your lender if there is a prepayment penalty, an administration fee, appraisal fee, reinvestment fee and more. If you have a variable mortgage, you will need to pay three months’ interest to break the mortgage. With a fixed-rate mortgage, the penalty is unconscionably larger: three months’ interest or the interest rate differential (whichever is greater). To recoup some costs, it’s typical for the spouse who decides to stay to refinance the mortgage to come up with the funds.

Your lender will also need you to requalify for the mortgage on a single income. If this isn’t possible, you can try to find a guarantor or co-signer. Your lender may also ask you to provide a separation agreement if you have one and the amount you pay for child and/or spousal support.

If your ex decides to take over the mortgage, it’s advisable to remove yourself from the mortgage completely. This is because you will continue to be legally responsible for payments. If your ex fails to pay or something happens to them, you’re on the hook. 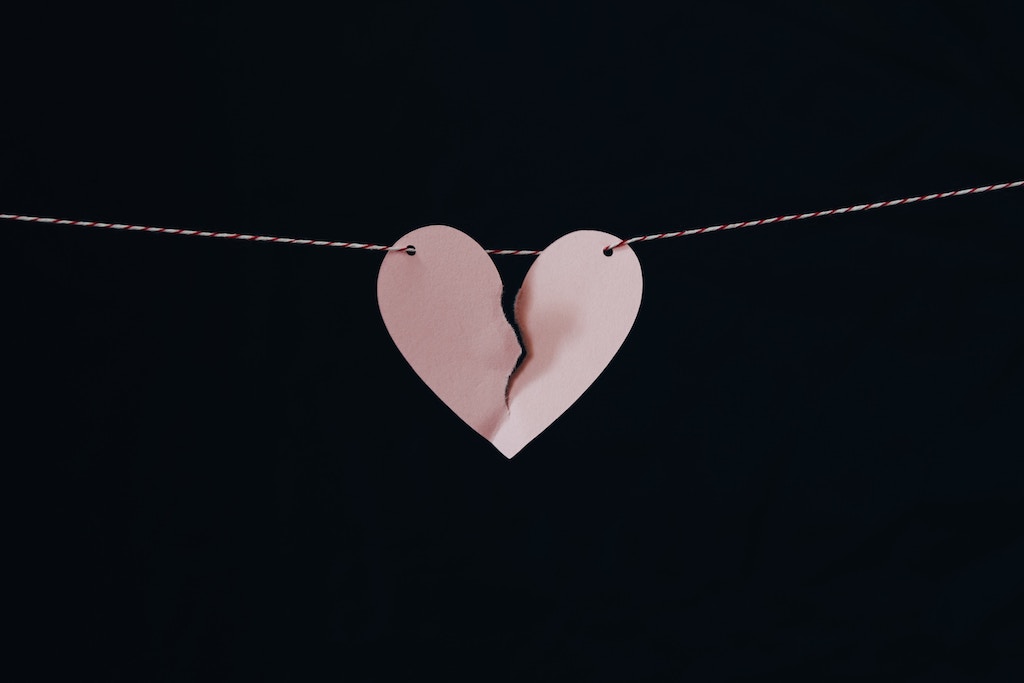 How much does a divorce cost when property is involved?

The short answer is, it depends. Paris explains the costs generally grow when people don’t want to accept what the law is.

“It really depends on the complexity of the matter, the types of claims that you’re making, and the willingness of both parties to accept the law or try to negotiate,” says Paris. When you and your spouse are on the same page and have done the negotiating in advance, you can mitigate costs significantly. “You already have everything negotiated and a clear plan of action. In those circumstances, it’s just a matter of drafting something up, reviewing it and you’re out the door. You can do that potentially within $5,000, assuming there isn’t much back and forth but it’s hard to put any dollar value on that,” explains Paris.

If you have a lot of negotiating to do, your best course of action is to find a good lawyer and listen to them. “The reality is, if you can’t figure it out, the court is going to order that the house is sold,” says Paris. “A lot of people are going to want to fight that battle, contrary to the advice of their lawyers. To mitigate your losses, my advice is to listen to what your lawyer has to say. Because the court doesn’t care about the sentimental value of a house.”

About Real Estate, Around Ontario, Around the House, Around Toronto, Baby Boomers, Buying a Home, Condos For Sale, Did You Know?, Gen X, Homes for Sale, Investment Properties, Millennials, Selling a Home, The Law