About Real Estate, Across Canada, Around Ontario, Around Toronto, Buying a Home, Homes for Sale, Millennials, Selling a Home, What's New in the Housing Market? 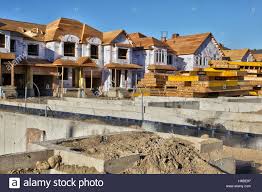 National housing starts fell for the third consecutive month in October, in what some industry experts are calling a further sign that the Canadian housing market has adjusted to policy changes introduced earlier this year.

One thing the lower numbers could affect? Increasing the Bank of Canada’s confidence in following through on its already likely interest rate hike later this month.

“Demand continues to be supported by the fastest population growth in 27 years and new millennial-led households,” writes BMO senior economist Sal Guatieri, in a recent note. “A calmer housing market is just what the doctor ordered, and won’t discourage the Bank of Canada from raising rates on October 24.”

The BoC hiked the overnight rate to 1.50 basis points in July, and many industry experts are predicting another hike later this month.

“The September housing starts report fits with the relative calm and return to normality in sales, market balance and price growth that we are seeing across most of the country this year, in particular Toronto, following speculative excesses in Southern Ontario earlier last year and a moderate correction in response to policy measures earlier this year,” writes Guatieri.

Guatieri is referring to the effects of the Ontario government’s Fair Housing Plan, which came into effect last spring, and a new mortgage stress test introduced in January. Many economists agree that the market has largely adjusted to the policy changes, and will continue to gradually warm over the coming months.

RBC senior economist Nathan Janzen agrees that the starts report will be unlikely to dissuade the BoC from raising rates on the 24th.

“Earlier housing market activity was probably too strong to be sustained,” he writes, in a recent note. “The slowing to a more manageable pace of activity should be welcomed by the Bank of Canada and isn’t expected to prevent further gradual interest rate hikes.”

About Real Estate, Across Canada, Around Ontario, Around Toronto, Buying a Home, Homes for Sale, Millennials, Selling a Home, What's New in the Housing Market?